Everyone has the right to go home

It’s a phrase used in Sustainable Safety and one our CEO and collaborator of said guideline, Johan Diepens, has used many times to describe why the principles behind the larger Vision Zero movement are so invaluable: “Everyone has the right to go home.” As someone who has been working in cycling advocacy for the better part of ten years, I have always understood what it means as an overarching theme. However, since moving my family from the West Coast of Canada to the small Dutch city of Delft, I have come to have a greater appreciation of what those words actually mean.

The Principles of Sustainable Safety

Sustainable Safety, Duurzaam veilig in Dutch, is a guideline for the Dutch approach to road safety, first created in 1992. At its core it the document outlines many of the same principles of the more recent Vision Zero. It sets out a policy aimed at designing streets in a way that eliminates the potential for a crash and injury rather than taking steps after they happen. It is a proactive policy guided by five principles:

These five principles have had a dramatic effect on the safety of Dutch streets. But it is seeing these principles in action that has made their value so clear to me, especially when it comes to the two humans I have watched grow up on bikes.

The benefits, and challenges, of growing up on bikes

My children, now ages 13 and 10 respectively, have, like most Dutch children, grown up on bikes. This was the benefit of living in a Canadian city that started making some very serious investments in cycling in 2008. Starting out in bike trailers and our bakfiets, transitioning to a tag-along bike and then eventually to their own two wheels around the age of 4, our kids are no stranger to traveling the city streets on two wheels. We saw first-hand the benefits of that; being able to navigate their neighbour without our direction, experiencing their city at a very human level and understanding how their bicycles gave them the freedom to be in control.

However, despite living in a relatively comfortable city for cycling, letting our children travel without us was harder to accept. Even as an adult, every time I left the house on my bike I worried about my safety until I reached the physically separated cycling areas, which were very rare in our neighbourhood and the places where our kids needed to go. But all that being said, we felt our kids were enjoying what it meant to travel in freedom through their city. Until we moved the Delft.

Suddenly in control of their mobility

It happened within weeks of settling here – that moment when I began to truly understand what it means to have the “right to go home”. Our 10-year-old son befriended a child living in an adjacent city and about a 6-km bike ride from our home. On his first visit, we made the trip with him, noting the turns he was taking, and then he did something we wouldn’t have dreamed of allowing him to do before. He cycled home on his own and has subsequently continued to make the same return trip regularly. Meanwhile our 13-year-old daughter was navigating her new city and further afield entirely independently by bike, finding her way, getting lost, and then finding her way again, all without our guidance.

Meanwhile, mom and dad did our own thing, completely calm and without worry. So what changed? Simply, the environment they were traveling in. We knew that they were navigating streets designed to ensure that they were as safe as the could possibly be. Separated on comfortable, wide cycle-tracks from busy car traffic on major roads, given priority at intersections and passed slowly and with respect on shared roads. We now know that no matter where they travel, a safe-comfortable option exists to get them where they need to go, and then safely home again. Two children, among their peers, given the respect and the right to the freedom and independence to be in control of their mobility. 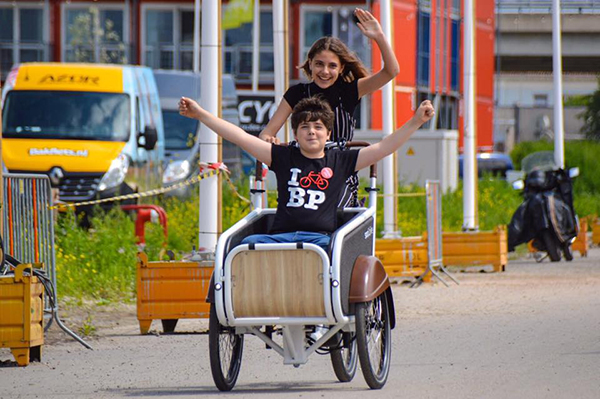 The respect to travel safely

And that’s the point of Sustainable Safety – that no matter your age or ability, you have the right to be in control of how you move through your city and the respect to do so safely and comfortably. I recognize the privilege my children now enjoy compared to how they lived before, and how the work I get to be a part of helps make that a reality not just in the Netherlands, but for children – and everyone – everywhere.

Why we are going to COP27