To make the world less dependent on the car, we must take a variety of approaches to address key areas where improvements can be made. One such area is around schools, where there has been a steady increase in the number of kids being driven to and from school by their parents and caregivers. This not only deprives children of physical activity, independent mobility, and peer socialization, but also leads to hazardous traffic congestion around school sites. There is an opportunity to shift these daily trips to more sustainable modes that will provide numerous benefits for cities, their residents, and the kids themselves. 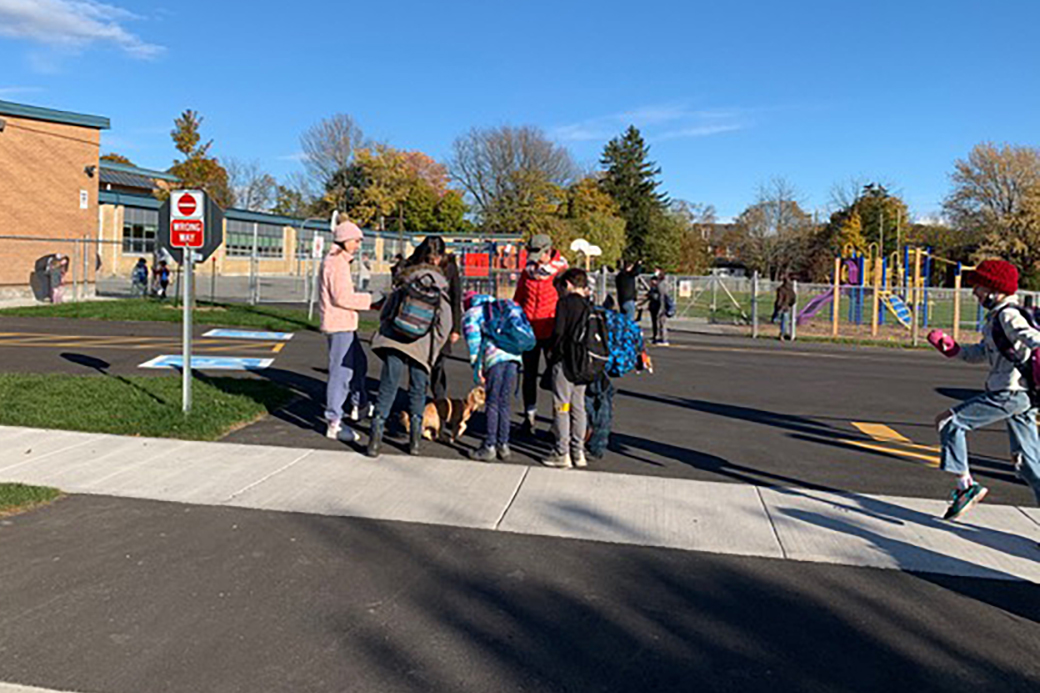 *All photos provided by KCAT

I spoke with Roger Healey, a member of the Kingston Coalition for Active Transportation (KCAT), to learn more about the School Streets approach and how the non-profit organization has worked to implement it in Kingston, ON, Canada. The following responses were provided by Roger and have been edited for conciseness.

How do you define School Streets and what is their main purpose?

Originating in Europe and gaining popularity across Canada, School Streets involve temporarily closing roads to vehicles adjacent to schools for brief periods of time at the beginning and end of the school day. The goal is to create a safe zone for children to come and go by preventing parents and other motorists from passing through the area with their vehicle. The resulting absence of congestion encourages active school travel, promotes clean air, reduces noise, increases social interactions of parents and students and, above all, enhances safety for all. 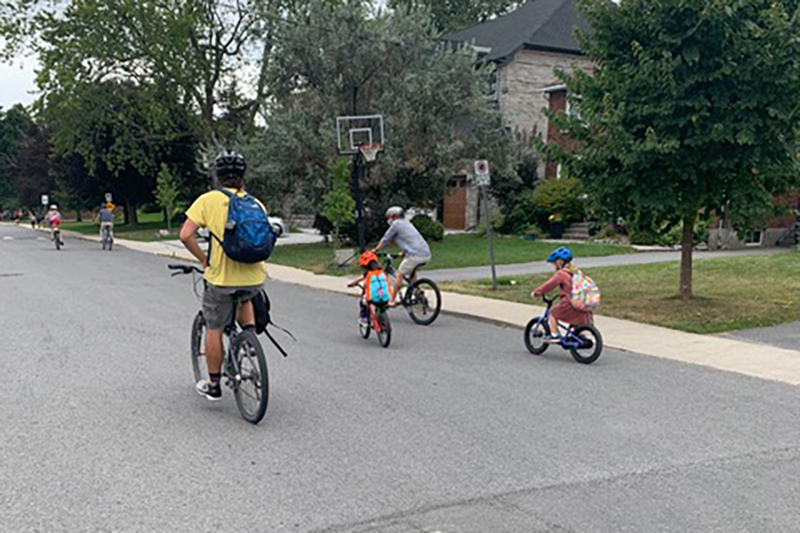 Can you provide an overview of what’s been done in Kingston? How did KCAT become involved?

The City of Kingston has attempted to address traffic congestion around schools, prioritizing “Safe Routes to School” in the City’s Active Transportation Master Plan (2018). This includes piloting School Street initiatives in select neighbourhoods to further inform their active school travel promotion efforts. KCAT was enlisted as the lead organization to run the city’s first School Street initiative, with support from Kingston Gets Active (KGA) and Queen’s University.

In January 2020, Kristin Cote (KGA), Dr. Patricia Collins (Queen’s), and I began working closely with the City’s Transportation Services Division to identify potential elementary school sites where a School Street initiative could be piloted. Once a short list was established, we reached out to principals of prospective schools to determine whether they would be interested in taking part. By May 2021, a willing school community was identified, and in June, KCAT submitted a road closure permit application to the City for the initiative to run from September 2021 through June 2022. The permit application was approved unanimously by City Council, and KCAT launched the School Street on the first day of school. It ran during the drop-off and pick-up times of all 71 school days prior to the December holiday break, thanks to the commitment of our many volunteers. 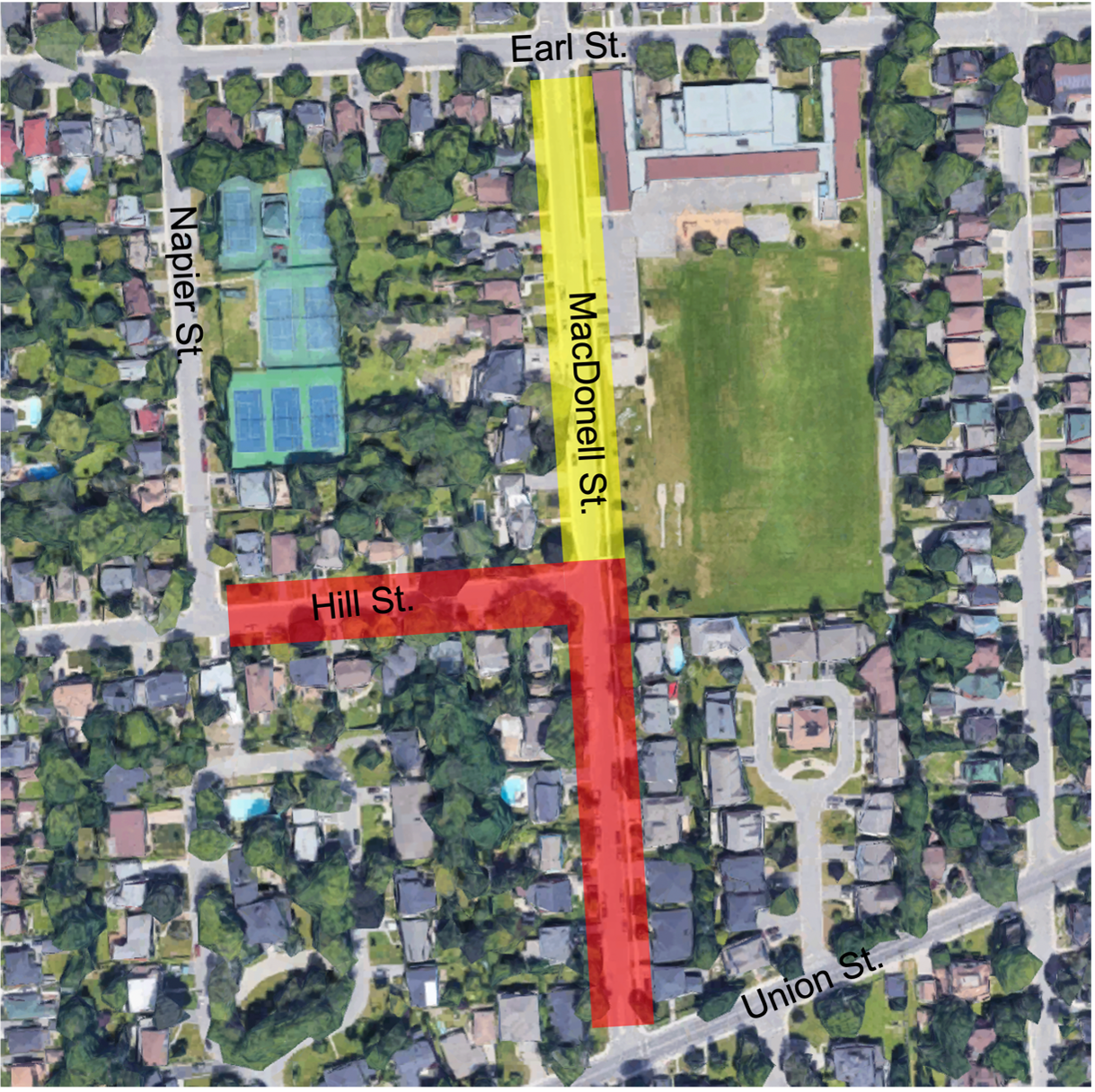 What were the major challenges that had to be overcome for implementation?

The process of securing a site to run the initiative took well over a year, complicated by various disruptions from the COVID-19 pandemic and other matters. Not every principal that was contacted was willing to speak to us and some supported the goal but had reservations about the feasibility of the initiative at their school. The selected site was the one from which we received the most enthusiastic response from the principal, but getting approval to proceed still required considerable parent, staff, and community outreach.

Permit approval and volunteer recruitment were additional hurdles to overcome. With a planned launch of September 7th, the August approval of a traffic control plan left KCAT with roughly 3 weeks to recruit and train enough volunteers to ensure the initiative could launch on time and be sustained every school day afterwards. The School Street has been supported by an outstanding roster of roughly 40 people, including parents, nearby residents, and Queen’s students, but maintaining the volunteer roster is an ongoing challenge. 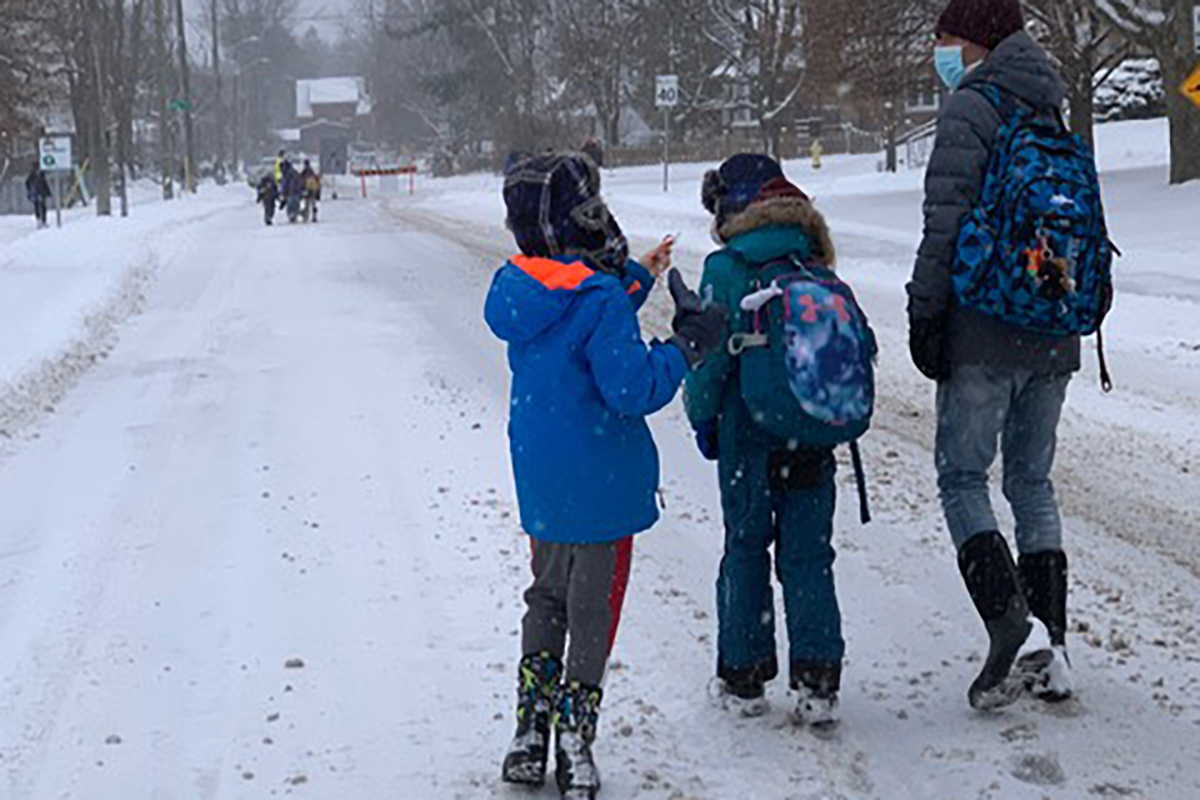 What has the response been like from residents and stakeholders?

Since day one of the School Street, volunteers have observed that the students coming and going appear happy, calm, and confident, as they encounter a new sense of quiet and freedom in the 200-meter stretch of road adjacent to the school. While some parents initially expressed worry about how the initiative would disrupt their daily routine, they now appear similarly pleased and none have complained to the volunteers, KCAT, or the school principal. Even those who continue to drive their children to school are having no problems finding parking further afield and walking to the school entrance.

While some school staff were initially unhappy about the initiative, KCAT adjusted the traffic protocols to accommodate them, which greatly reduced their frustration. The school principal is very pleased so far and is keen to see the initiative continue in 2022.

Several residents, while not overly vocal prior to the initiative’s launch, expressed frustration, and at times hostility, in the first few weeks, creating challenging conditions for some volunteers. This frustration was quickly quashed when the initiative scope was reduced from a 520-metre to a 200-metre span at the 6-week mark, reducing the number of affected households from 37 to 9. 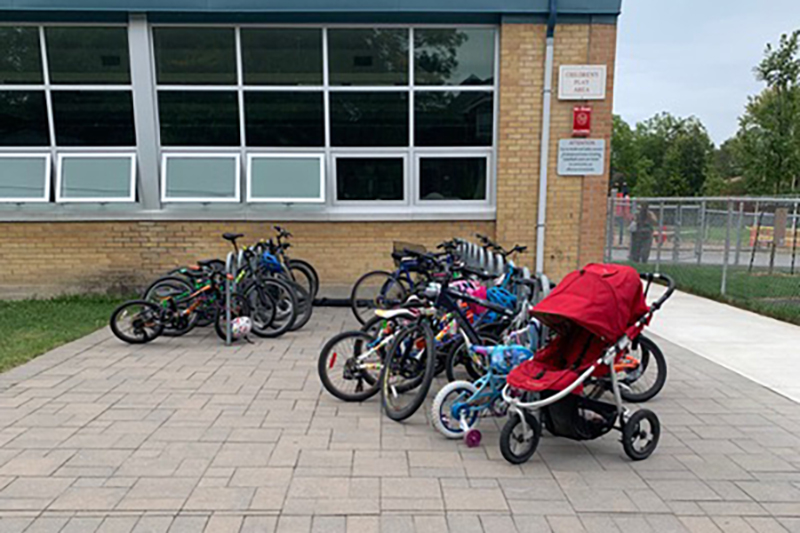 What advice you would give to other organizations and municipalities wanting to do this in their community?

1) Securing willing school partners takes a lot of time. Allow several months (or more) to work with school principals, staff, and parents, as well as school boards and municipal transportation departments. Be prepared to do some trial runs if your targeted school community is interested but apprehensive.

2) Having an enthusiastic and supportive school principal is essential for success. Unhappy parents and school staff will complain to the principal, so it is critical that they are not afraid to champion the idea in the face of criticism.

3) Never underestimate the resentment and backlash that will come from motorists who feel entitled to use the road unencumbered. If your initiative relies on volunteers, regularly remind them of why they are doing this work and provide training in conflict resolution.

What’s next for the School Streets pilot in Kingston? Are there plans to expand the project to more schools?

This pilot will continue to the end of June 2022. We hope to run another School Street next academic year (September 2022 to June 2023) at a different location. We continue to search for ways of making this approach sustainable so that School Streets will be implemented all over the city with as little cost and volunteer time as possible.

If you are interested in learning more about School Streets and/or the pilot project in Kingston, you may contact me, Eric Post, at e.post@mobycon.com or Roger Healey directly at healey@queensu.ca.

Fundamentals of a Safety First Approach