A Mobyconer in China Part 1: Bike-sharing

The pandemic has taken a toll on many people’s personal travels, myself included. In Fall 2021 I was finally able to visit my family in China after three full years of separation. Despite quarantine requirements, my itinerary gave me the chance to spend time in Shanghai, Canton (Guangdong), and Beijing, some of the most developed metropolises in China. The local mobility realm in these three urban centres certainly benefits from their economic growth – although car ownership (including EVs) is on the rise, the development of MaaS and sustainable transportation integration is conspicuous.

Based on my travels, I have composed a travel blog series highlighting some of what I witnessed in China. The first part focuses on the bike sharing programs in China. 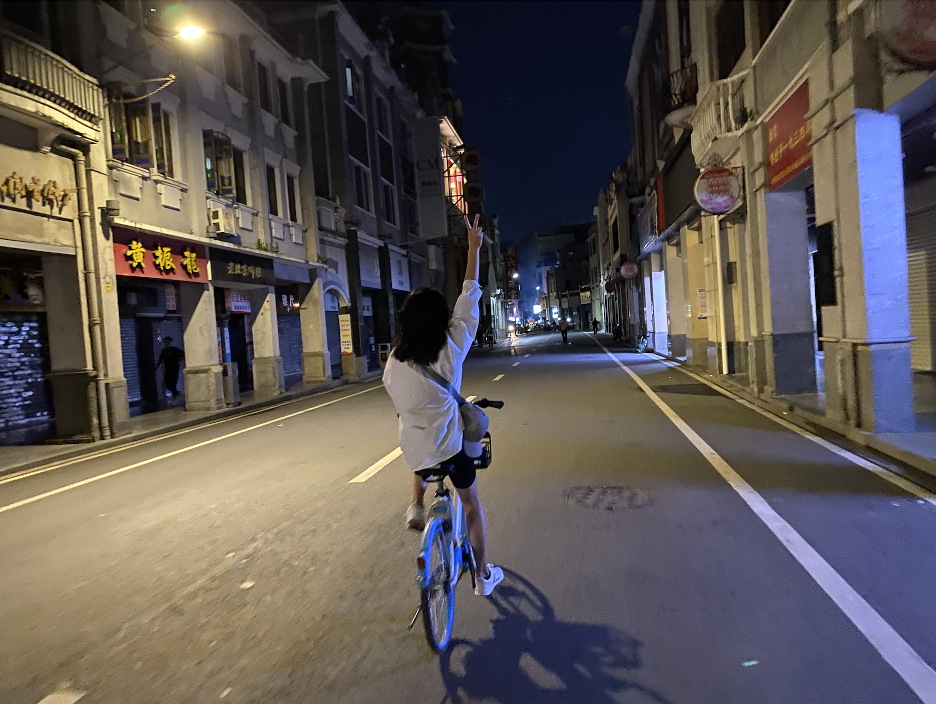 A quick recap of bike sharing in China

Dockless bike sharing schemes in China have gone through the roller coaster craze in the last five years. At one time there were countless providers in the market, each spreading their shared bicycles throughout the cities with a distinct colour. It was not uncommon to find a rainbow of bicycles littered here and there. One of my most cherished memories during my wedding day in 2018 is picking up my bride and returning to my parents’ home via two orange shared bikes. Nowadays, few providers have survived, and it was sad to discover that those orange bikes have also disappeared. In the cities where bike-sharing services still operate, only 2-3 service operators remain, and they have learned to coexist under tighter regulations. 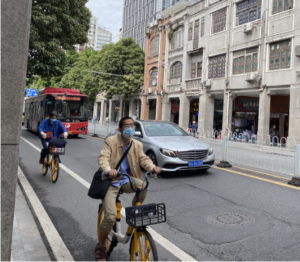 Because bike sharing has great coverage areas and the service charge is competitive (a weekly pass costs you ~7 RMB = 1.5 CAD), many locals have opted for bike sharing to compliment their daily commute. They can easily ride from their neighbourhood to the nearest metro station, travel by metro to their destination station, and then complete their trip with another ride from the metro station to their office (i.e. the first and last kilometre) and vice versa. With a pass, one can ride a shared bike free of charge for up to 2 hours, so a person theoretically can complete a long commute without switching to mass rapid transit if they are physically fit and can afford the required time.

With the upgrade of geofencing technology, and local bylaw updates, the placement of bicycle pick-up and drop-off locations has gone from a chaotic rainbow to an organized system, and their usage is well-mannered. On major streets, two or more pick-up/drop-off zones are designated on every block or near bus stops, often using paint and sometimes signed. These geofenced zones are also indicated on the bike share providers’ app. Those who park their bicycles outside of designated parking areas will not be able to lock their bikes or otherwise be ticketed with a surcharge. Unfortunately, because some streets have narrow sidewalks, the placement of these parking zones have made the available space on sidewalks even narrower. Having experienced similar systems in North America and Europe, I can’t help but wonder whether it would make more sense if bicycle parking zones were moved to the roadway, taking up an existing car parking stall or two instead? 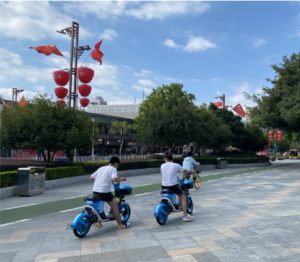 Since electric mobility is gaining popularity across China, in order to stay competitive, bike sharing service providers are providing customers with an array of “vehicles” where local regulations allow. This includes electric-assisted bicycles and e-mopeds. These shared devices have more comfortable built forms, , allow users to expand their range without requiring them to invest thousands of dollars in getting their own electric two-wheelers. 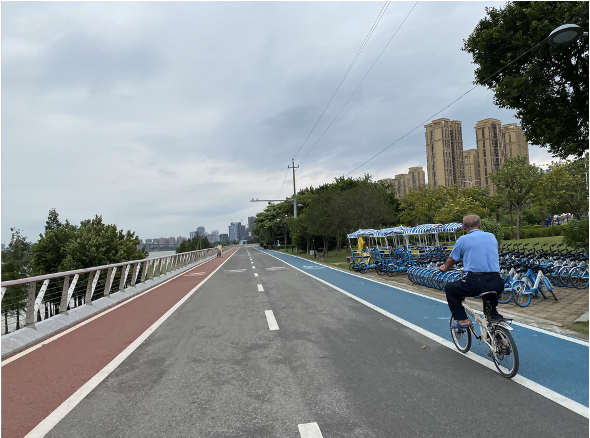 With easy access to bike sharing, it becomes an To take full advantage, I signed up for a weekly pass in one of the cities we visited and frequently rode shared bicycles for the maximum of two hours until I had to jump onto another bike to extend my trip. In another city, depending on which bike share brand was more visible, I may switch to another provider. On one occasion, I was using a shared bike to travel from the west end of Beijing to the east, following the #6 Metro Line, switching bicycles twice (once due to a mechanical issue). Although it is not as fast a way to travel compared to going underground, quite the opposite in fact, it gave me the opportunity to wander and check out urban landmarks and streetscapes in a casual way. 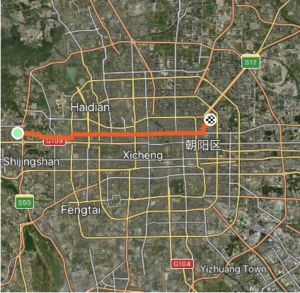 Every trip I take, I find traveling on a shared bike a decent experience. During my trip to China, my one complaint would be that, for some reason, shared bicycles are not allowed to enter many urban parks, whereas personal bicycles are permitted. It seemed odd to me why city officials perceive this as an issue, especially with the geofencing technology in place.

Still, the dockless shared bike is sentimental for me, reminding me of my wedding day. Beyond my own personal experiences, it broadly meets the needs of utilitarian and leisure users in China, and is one of the beautiful things about its urban fabric.

Stay tuned for further updates about my travels and experiences in China.