Learning Through Experience: Mobycon hosts a study tour from Kentucky

On 8th May, we were delighted to welcome students and staff from Transylvania University, Kentucky, to learn about Dutch cycling and experience it a little for themselves. Study tours are something we are always pleased to offer groups traveling to The Netherlands as we see them as an excellent opportunity to not only learn from our in-house experts who work on cycling projects both locally and abroad, but also experience first-hand how the plans and standards that have been adopted in the Netherlands impact the way cities have developed and how people easily and comfortably move through them. Our goal is to inspire visitors to see things a little differently and hopefully bring those ideas back with them to their cities. 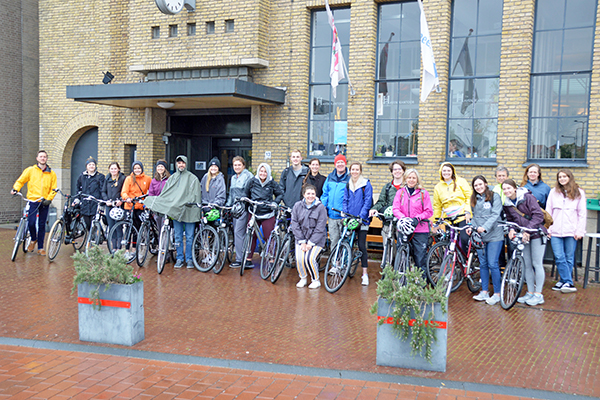 Mobility experts Shelley Bontje and Jason Colbeck began the half day session by introducing the group to the history of cycling and mobility in The Netherlands. They discussed the dramatic rise of the car in Dutch cities – similar to many western countries – and the impacts it had on the built environment, safety and social cohesion. The group also heard how these changes reached a tipping point in which safety, particularly for children, was compromised to such an extent that regular citizens began demanding change. The discussion included how community activism in response to these changes, along with a series of policy changes in the 1970s and 1990s, helped to transform Dutch towns and cities into the liveable, people-friendly places experience today throughout the country. There was also some discussion around the future of mobility in The Netherlands, and how new and emerging ways to travel could have an impact on the way urban areas are planned and designed.

The Dutch weather conspired to show the Kentuckians that even on a chilly, wet spring day, people are not made of sugar and will still travel by bike! Shelley and Jason took the group on a tour of Delft, the home of Mobycon’s head office, highlighting the changing landscape of the city and its people. The first stop was city’s modern new train station and the site of one of the country’s largest housing and infrastructure projects. Shelley demonstrated how the urban fabric of the city is undergoing continuous change, including replacing the former at-grade rail-lines, station and concrete viaduct with an underground station and thousands of new homes. The group saw how cycling has been built into the design of the new district from the start, with a free bicycle parking facility complete with 7,500 spaces, accessible directly from the railway platforms, and linking to the city centre as well as the surrounding neighbourhoods through the existing bike network. 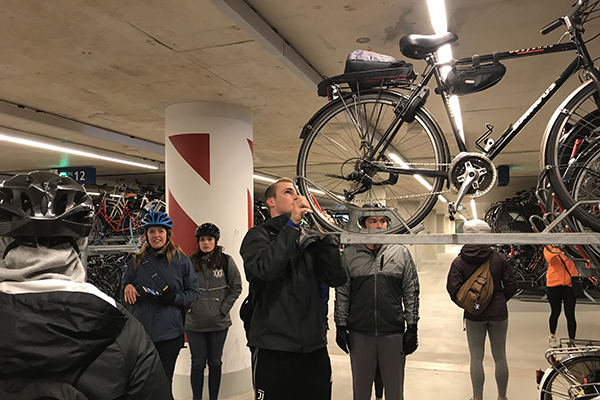 As the tour continued, they traveled to areas of the city that have only been developed in the last half of the 20th century, showing the group that even in The Netherlands post-war spatial planning meant creating more space for the car. They were able to experience how different this environment was to the more historic centre, and how it changed the way people traveled. The group learned how, through a shift in policy and design ideology, car-dominated planning has since been tamed with much of this space reallocated for cycling and walking, including the impressive – multimodal – Delflandplein roundabout in which people walking and cycling are given priority over passing cars, buses and even trams. The tour also stopped off at the world’s first woonerf, or ‘living yard’ in which members of the community sought to create their own traffic-calmed streets and spaces in an early example of tactical urbanism, leading to changes that have since been enshrined into Dutch street design. 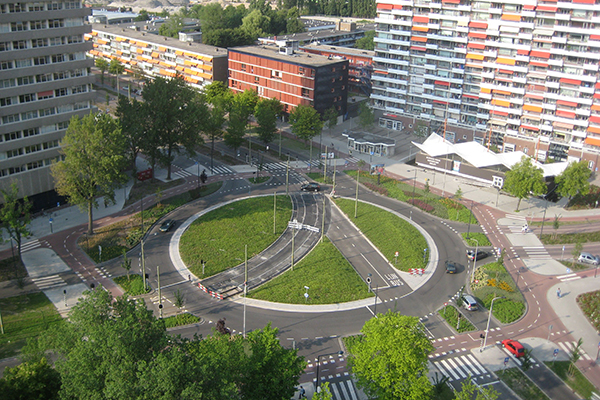 Of course no tour of Delft would be complete without a visit to the historic city centre, where the group heard about more recent changes to make the city more people-friendly by removing through traffic, maintaining access only, and relocating parking underground to create a lively city centre in which pedestrians are prioritised and people walking and cycling coexist peacefully. Finally, a brief loop through the Delftse Hout – the city’s green oasis – showed the group how the cycling network extends beyond city streets to provide easy access to the surrounding natural environment and traffic-free, active routes for leisure as well as transport.

Already seasoned fietsers from their previous travels in Amsterdam and Leiden, the group had been able to gain a better understanding of the history and processes that the Dutch have experienced in order to achieve the active and human scale environments they now enjoy. The students and staff at Transylvania University are always engaging and eager to discover new ideas, and this trip proved no exception. Mobycon looks forward to hosting them again and exchanging knowledge from both sides of the Atlantic.

The 15-Minute City: A Feminist Utopia? 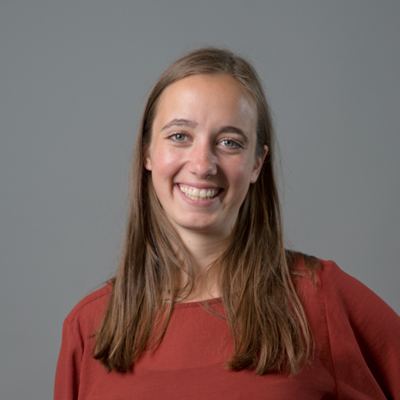 A Mobyconer in China Part 2: What Safe Active Transportation Facilities Have in Common