Parking. It is a huge problem in many cities. Whether you have too much of it, or too little, everyone seems to have an opinion on it. It’s too expensive, it’s too hard to find a spot or the excessive parking craters have ruined your urban landscape. The Netherlands is not a stranger to these discussions, but at our train stations, a parking problem of a very different kind is on the minds of policy makers. 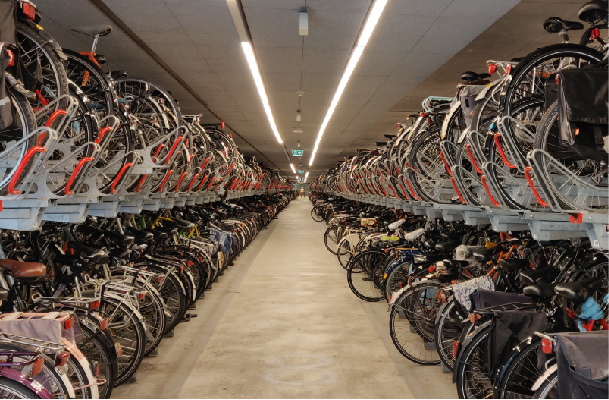 The largest train stations in the Netherlands are struggling to provide enough parking for bicycles. While most central stations have thousands of spots — and are in the process of building thousands more — the demand seems to be insatiable. As with car infrastructure, building bicycle parking seems to induce demand. So far, this has been perceived as a fantastic problem to have, with the government happy to loosen the proverbial belt further and further, investing millions of euros in fancy underground parking garages. The pinnacle of this policy is the biggest bicycle parking facility in the world in Utrecht, housing over 12,000 bicycles, its second half opening later this week.

While the combination of cycling and public transport is indeed very attractive, we can see the limits to its growth. Walking distances are increasing, it is getting harder and harder to find a spot for your bicycle and locating your bicycle again at the end of your trip can be a real challenge. At the same time, adding bicycle parking gets more expensive, with the latest underground bicycle parking spots clocking in at over €4,000 per spot.

As a proactive measure to reduce parking pressure Mobycon has developed a new bike share concept: Wisselfiets, which the city and regional government of Amsterdam will begin trialling in early September. During this pilot, people living in Amsterdam and those who arrive into the city by train for work, school, etc. can register to participate, with the one based in Amsterdam exchanging their bicycle for one provided by the city. This bike, equipped with a bluetooth lock, will then be parked in a designated spot in the underground garage, available for use only by registered participants.

Those located in Amsterdam will drop off the provided bicycle at the station in the morning, with the person arriving at the station by train then using a bike from the pool throughout the day. The bikes are then returned to the designated spaces at the end of the day for Amsterdam-based participants to take home in the evening. This use of one bicycle for both first and last-mile journeys has the potential to greatly reduce the parking pressure at stations.

It combines the simplicity of the extremely popular OV-fiets bike share system with the growing popularity of Swapfiets (a full service leased bicycle concept). It provides participants with a functioning bicycle at all times, and it comes with a guaranteed spot at the train station, thus improving the predictability of the trip. We are hopeful this will further enhance the quality of the bike-train combination trip while reducing the (financial) burden of providing more and more free parking at prime real estate locations.

Mobycon was instrumental in bringing this pilot together. We not only developed the concept in the first place, but also wrote the schedule of requirements and connected the City of Amsterdam with potential providers. It is a project to be truly proud of, and we look forward to seeing how the pilot unfolds and how this innovative approach to a very Dutch parking problem can be expanded to other cities in the future.

‘The interplay of different modalities within cities intrigues me. I am always looking for the best solution for the city and its inhabitants, while playing close attention to bikes. In the Netherlands and abroad I give workshops on the development of cycling culture, strategic network planning, street design and intersection design.’

Why we are going to COP27