The following post was originally publish in Dutch on Biind.nl: http://bit.ly/2l0J1Cl 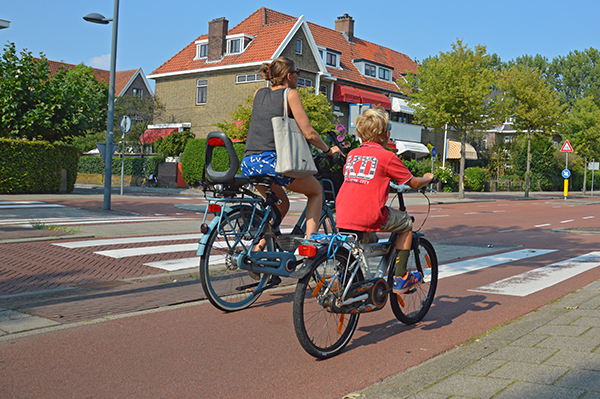 The following factors form the five pillars for the success and sustainability of children cycling: technology, preparation, upbringing, education and freedom.

First of all, there’s the bike, the tool you need to cycle. Almost every child in the Netherlands has a bicycle. For those who do not, luckily, we are benefiting from increasing concerns that every child should have access to a bicycle. Examples are the ANWB that established the Children’s Cycling Plan and Stichting Leergeld that provide children from low-income families with a bicycle so that they can participate in activities in and out of school. Moreover, in the Netherlands we have a wide variety of children’s bicycles to choose from, available for sale in many shops, including second-hand bicycles.

Then, of course, there’s the child on the bike, who develops his or her own cycling skills while playing. This starts from the moment they travel with their parents, grandparents or other caretakers on the bike, then with a balance bike or tricycle and finally, when they are ready to learn to balance on a small bike without support or training wheels. Children gradually build their self-confidence and are prepared step-by-step for traveling on city streets independently on a bike.

The next stage of children cycling is linked to parents. They must feel that it is good to teach their child how to ride a bicycle, that it is a natural part of their upbringing. They must also feel that the environment is both physically and socially safe for their child, allowing their child to travel more and more independently in traffic. In this way, parents can give their child the confidence he or she needs.

The fourth pillar focuses on education. Fun, practical traffic lessons at school contribute to the knowledge and skills of our children on bicycles. There is quite a lot of variation in how traffic rules and behaviour is taught at schools within the Netherlands. This is because schools themselves decide on the type of program used, whether or not to collaborate with parents, the police and organizations like VVN (Safe Transportation Netherlands).

Finally, the fifth pillar is free space, where it all comes together. Children need the freedom to play on the bicycle, to practice – first close to home and then to go a little further into the neighbourhood – to develop their skills. Bicycle paths and low speeds play an important role in protecting our children on the streets, but before they reach that point, they have preferably logged countless hours on a bike close to home. That’s why apart from cycle paths, we also need ample sidewalks, squares and fields to keep our children’s cycling skills fresh.

Ultimately it is the unique combination of these five pillars that ensure cycling for children in the Netherlands is kept at a high standard. It is an interplay in which different perspectives have to find each other, which means it is a vulnerable phenomenon. It also means that many people can make positive contributions. Be it a (grand)parent who teaches a child how to ride a bicycle, a local resident who donates a bicycle they found when they cleaned out their shed, or a volunteer who sets up a children’s bicycle route in the neighbourhood.

Professionals working in the spatial and social domains also play an important role in supporting and maintaining the creation of the combination of the five pillars. However, we do not have much insight yet into how this is happens exactly. Therefore, I am curious to hear from you: what contributions are you making?

Angela van der Kloof will be expanding on this topic during VeloFinland on Saturday, 5th October at 10:40am in the session, Streets as facilitators for an independent and active lifestyle. Click HERE for more information.