Good speed by design: A network approach to traffic calming 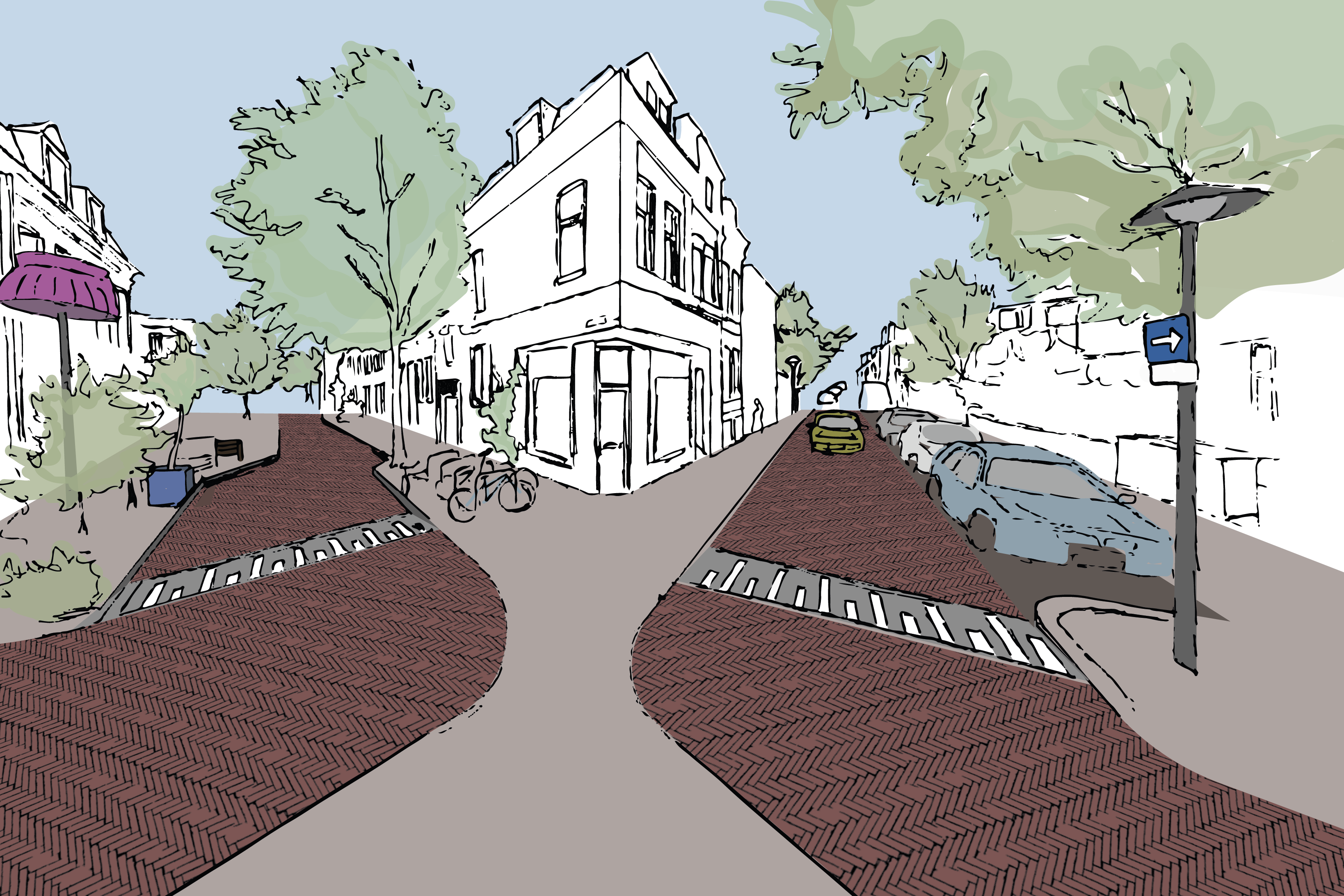 Good speed is by design. That is the simple message Lennart Nout has to pass on during a number of workshops he helped deliver in 2019. When examining how to apply a Dutch approach to traffic calming outside of the Netherlands, many people tend to say that the success achieved in the Lowlands all comes down to assumed liability, but he says that’s a non-starter. “The reality is that the design of a street – and the larger network as a whole – influences the speed at which people feel comfortable traveling along it.”

So, what IS traffic calming? In essence, it’s everything planners and engineers do to reduce speed and/or volume on a given street or in the network. How the geometry, texture, friction, enclosure – street canopy – and network design work together to influence how different modes use the space. For this reason, Lennart emphasizes how important it is to look at the bigger picture. “Traffic calming is area traffic management,” he says. “You need to manage the speed in a neighbourhood in a way that the behaviour of modes in the neighbourhood is expected.” That expected behaviour cannot be approached one street at a time. For truly successful reductions of speed and/or volume, the entire network needs to be treated in a cohesive way that takes out any guesswork.

The Core Principles of traffic calming

When our consultants provide presentations and workshops on the subject of traffic calming, they identify several core principles: 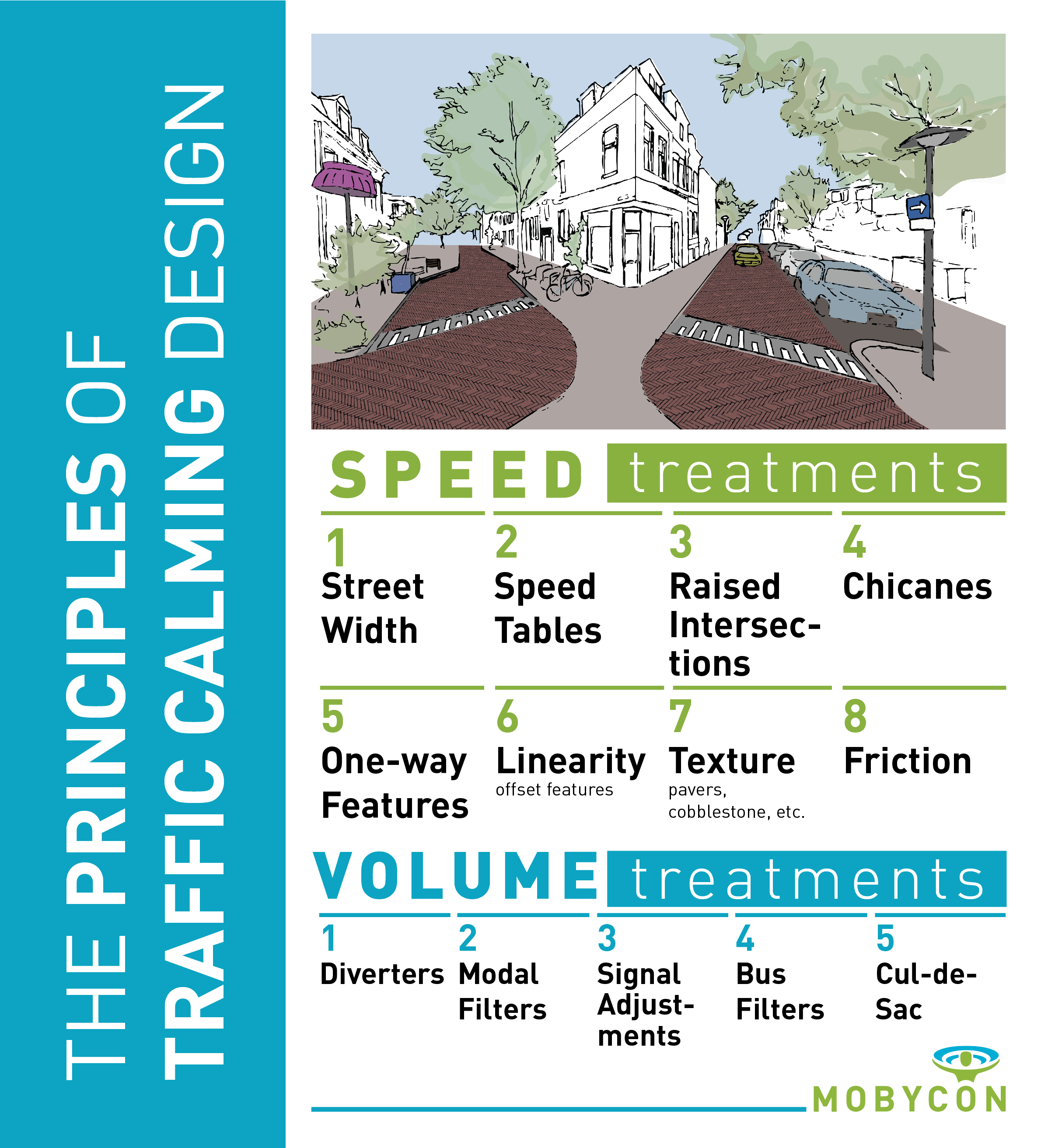 Adapting our understanding to changing trends

The concept of traffic calming is not a new phenomenon. It is something that has been addressed in a variety of ways for as far back as most transportation designers can remember. However, with an increasing mix on our streets of walking, cycling and driving, along with new mobility options popping up on an almost daily basis, the approach to it has had to adapt. For many cities, so much focus is placed on separated facilities that are certainly the safest option for more vulnerable road users but getting separation on all streets is expensive and almost impossible.

“Most streets have such low volumes that separation isn’t necessary,” Lennart explains. “Obviously on busier streets, separated facilities are a must, but when it comes to quieter, neighbourhood streets, you need to redesign the space to make it more comfortable for walking, cycling and play.” Traffic calming measures like narrowing a street or using a different surface treatment makes the whole street more comfortable, quieter, and a place for community. “Less is more,” he states. “You shouldn’t need heavy engineering with lots of concrete on a small street. Instead, you can make it work with as few design interventions as possible.”

But how do you address traffic calming on low-speed, high volume streets? Most town centres experience large numbers of people travelling through by car, despite Main Street, for example, still having a posted speed of 30-40 km/hr. In this case, a newer technique to traffic calming can be applied. One that does involve a separation of modes, but still facilitates vehicle volumes of 14-15,000 per day. Treatments like raised intersections, one-way features and added texture like cobblestone or pavers encourages travelling at slower speeds and a calmer environment that is more welcoming–and safer–for everyone using the space.

Traffic calming is NOT shared space

Through a combination of treatments, design elements and use considerations, the core principles of traffic calming can be achieved not just on residential streets but in town centres, retail areas and more. Lennart does have one caveat, though: “A traffic-calmed street is NOT a shared space.” While the former is focus on creating a safer traveling environment for various modes, the latter is more of a community-oriented space–a place to gather rather than travel through. “Shared space philosophies can be a traffic calming technique but a not every traffic-calmed street is shared space.”

This fall, Lennart joined Mary Elbech for a couple of workshops on the west coast where network approaches to traffic calming were presented. A number of our international consultants are delivering similar workshops to planning and transportation design professionals across North America and Europe. If you are interested in coordinating a traffic-calming workshop for your organization contact Lennart to find out more.

Introducing Mobycon Academy: A new way to learn with us!

The new face of learning